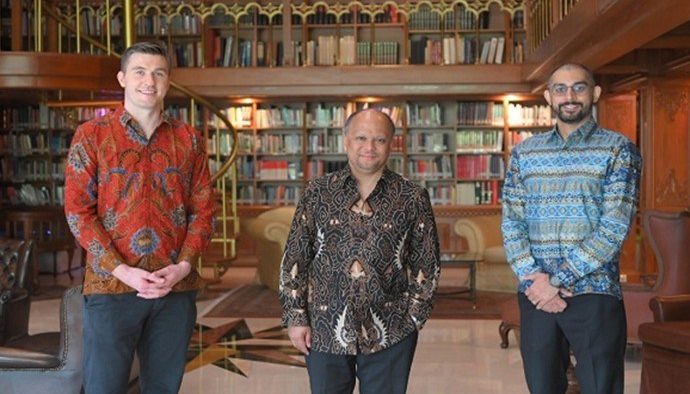 Fintech startup Ayoconnect announced and welcomed Ilham Akbar Habibie as Strategic Advisor at the company. It is hoped that Ilham’s presence at the Open Bill Network provider company will be able to broaden the horizons of the Ayoconnect team in improving the financial services and technology sector in the Indonesian market.

“Ilham Habibie is known for his contribution to advancing Indonesia’s education, economy and information technology. We are very pleased to welcome him to be part of Ayoconnect,” Chiragh said as quoted from the company’s statement, Wednesday (16/9/2020).

Chiragh also mentioned Ilham as a visionary figure who has succeeded in driving positive change through collaboration with various organizations from various backgrounds.

“The joining of Ilham Habibie as our Strategic Advisor is in line with Ayoconnect’s goal of accelerating financial inclusion in Indonesia through collaboration with state-owned enterprises and financial institutions, as well as collaborating with a wider community of entrepreneurs, change pioneers, and talented individuals,” said Chiragh further.

“I am moved to see Ayoconnect’s vision of providing innovative technology solutions for companies of all sizes, and their role in advancing financial inclusion in Indonesia. I believe that the presence of the Ayoconnect Open Bill Network is a breakthrough in the bill payment industry,” said Ilham.

As an entrepreneur and technology expert, Ilham is often involved in various technology-focused companies and organizations. Apart from serving as an advisor at Ayoconnect, Ilham is also the President Director at PT ILTHABI Rekatama, a private investment company, as well as a Commissioner at PT Bank Muamalat Indonesia.

Ilham is also active in various companies and organizations that focus on research and technology in Indonesia, including the Indonesian Chamber of Commerce and Industry (KADIN) and the National Information and Communication Technology Council (WANTIKNAS).

At the beginning of last August, Ayoconnect announced that it had received pre-service B funding of USD 5 million or around IDR 72 billion. Involved in this funding round are BRI Ventures, Kakaku.com, Inc., and Brama One Ventures. Early investors such as Finch Capital and Amand Ventures are also taking part in this funding round. The other investors are Strive and AC Ventures.

“Getting the right strategic investor is critical to our Pre-Series B funding. We look forward to solid partnerships with our previous and new investors, which are in line with Ayoconnect’s vision to shape the Indonesian billing ecosystem into one centralized network,” said the co-founder & CEO at Ayoconnect, Jakob Rost.

Jakob emphasized that this funding will be used for technology investment and partnership network development in order to build a trusted, secure, and fast digital bill payment infrastructure. In addition, said Jakob, the Indonesian bill payment industry is currently still predominantly offline, separate, and manual and that is what encourages companies to offer solutions.

Co-Founder & COO of Ayoconnect Chiragh Kirpalani said local governments have a good vision with digitization and have made digitizing payments as their priority agenda.

To encourage Ayoconnect’s penetration in local governments, said Chiragh, the company launched a solution that allows local governments to receive tax payments from their citizens more quickly. This solution was just launched this month and received a positive response from dozens of district/city governments.

“Ayoconnect has just partnered with the local government to handle the payment of Land and Building Tax (PBB) and Motor Vehicle Tax (PKB) in 92 districts and cities,” Chiragh said a few weeks ago.